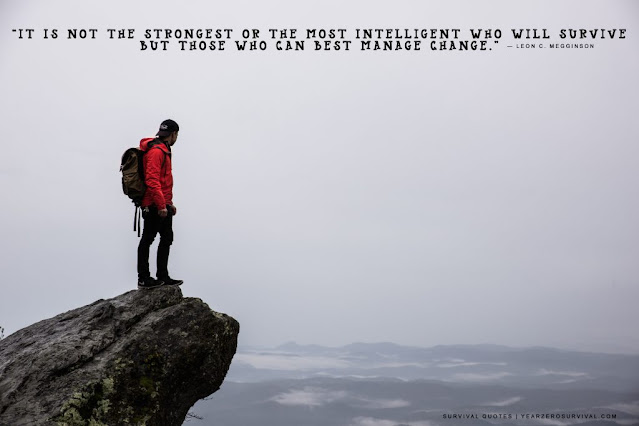 From Survival Quote Series Year Zero
Heat Dome/Garden Progress-
I don't know about anybody else but we have been under the heat Dome that's been all over the news. It's been in the 100°s for the last 2 weeks. But we lucked out today, it was in the '80s and it RAINED this morning! Not a lot of rain, but enough to really cool things down. We have just been watering, watering and watering the yarden. I've been taking extra cool care of our chickens. I use a water mister near their shade area, hose it down once or twice a day, and give them cool treats. Our tomatoes been growing like crazy in the heat! Typically tomatoes don't set fruit over about 80° or so, luckily there were lots of baby tomatoes already on the vine. It's made a HUGE difference in the production in the garden with more SUN. We did a major professional prune a while back. What a difference!!! 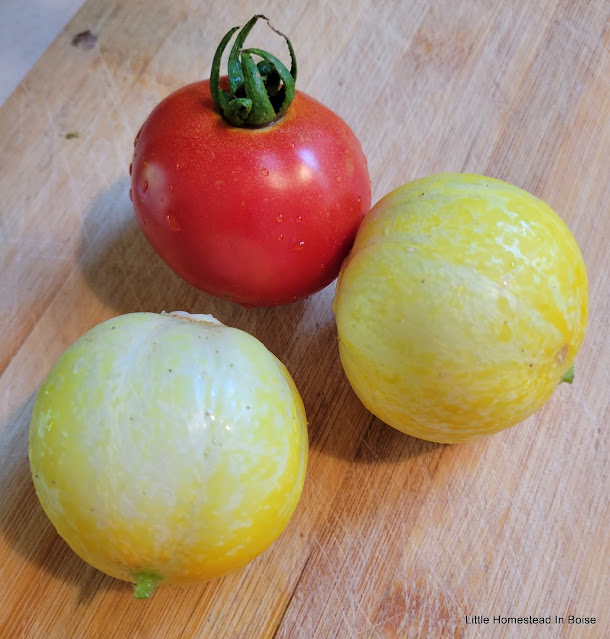 We finally had our first harvest! I picked one medium sized tomato and two lemon cucumbers. The lemon cucumbers are doing amazing, they are growing so fast! I decided not to plant any pickling cucumbers since I found a wonderful local farm where I can buy them fresh. I made the best fermented pickles ever last year using their cukes! We have a good amount of peaches on the front peach tree, just starting to change colors. Our apple tree is running a little bit light on the harvest this year. That's nature. That's why I wanted to plant three different kinds of fruit trees. The blackberries are ripening now as well. Pretty soon I will be canning fruit! I also bought a pressure cleaner so I'm going to start canning some meats and non-acid vegetables. I hope to be also canning soups for the winter. With potential blackout/brownouts/fuel shortage good to have easy, healthy fast foods on hand. If you're not getting prepared for some future difficulties better late than never! I heard about a shortage coming of Garbanzo beans so I bought about eight lbs. of dried in the bulk section. They're tucked away in glass jars with O2 absorbers. I also got a great deal on Augason Farms freeze dried strawberries, $20.00 for a #10 can, nice deal. Still on Amazon clearance. Never to late to get things in order... 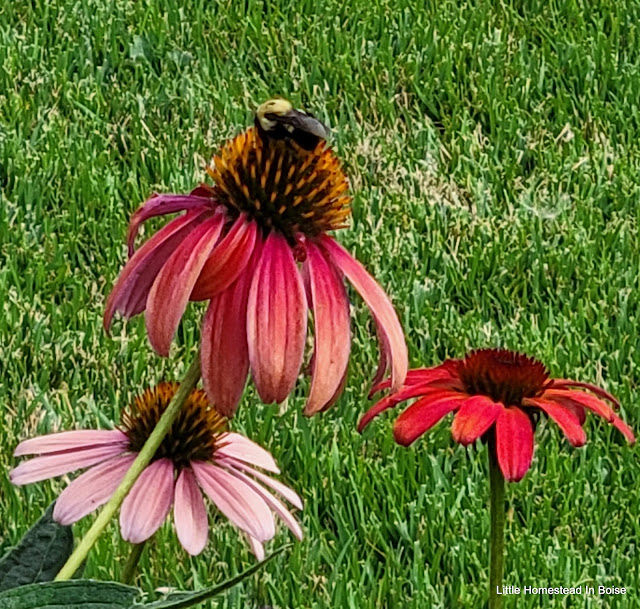 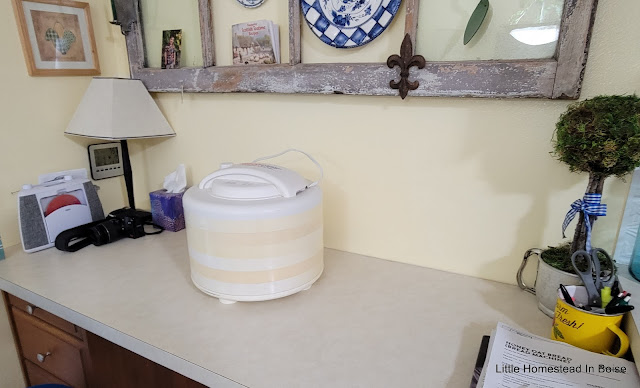 A More Resilient Kitchen-
When we bought our house almost 20 years ago there was a built-in desk in the dining room/kitchen. That worked out pretty well and we decided to use it for that. Later I really wanted to remove all of that and put in a buffet, but we never put new counters in the kitchen. I had hoped we would be able to do solid countertops and turn that area into a buffet for storage. Fast forward to now. I decided since I'm not working from home anymore to move our kitchen office into the spare bedroom. I'm hoping we'll be able to put some butcher block where the current countertop is. In the meantime I decided to take back my kitchen. We moved the computer system into the home office, where I previously worked at my job. That opened up the entire counter. I cleared everything off and wiped everything down. It's amazing how many dust bunnies were under there! I even had room to put out my radio/CD player!
I made 2 loaves of bread in the new (thrifted) bread machine there, Honey Oat bread (recipe in my Pinterest bread folder)- 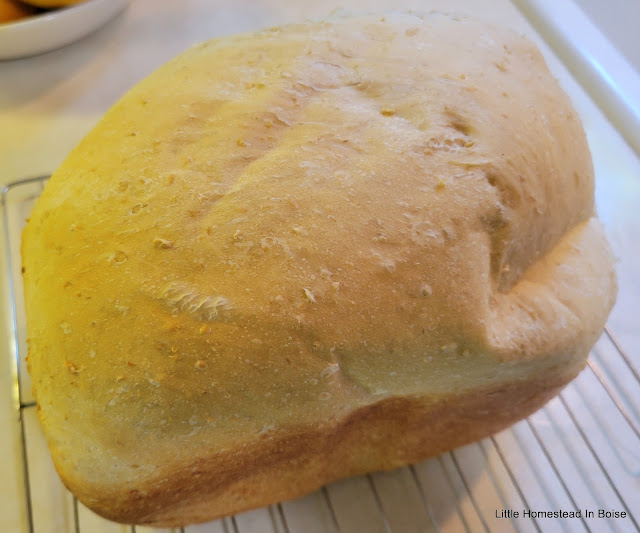 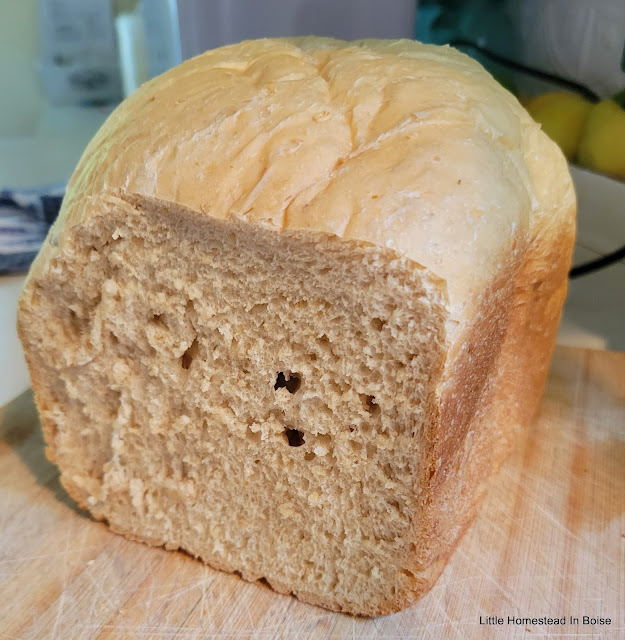 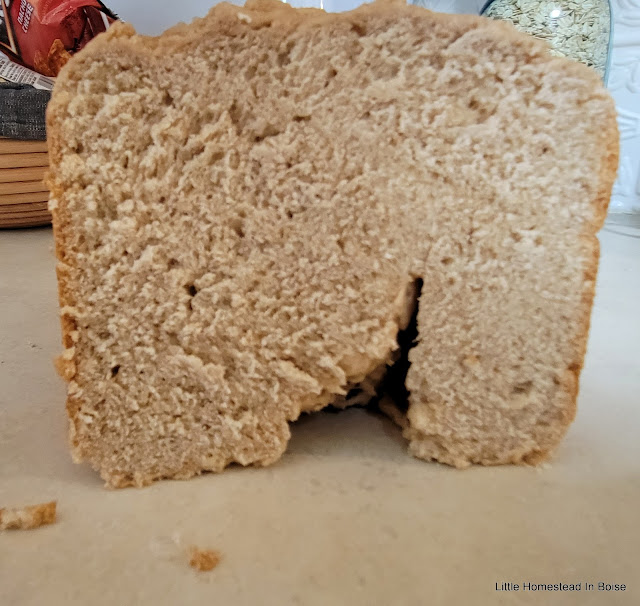 Hole from the paddle, great otherwise!
I will keep playing around and plan to make some herb breads too. One of the things I wanted to start using the area for is for dehydrating- 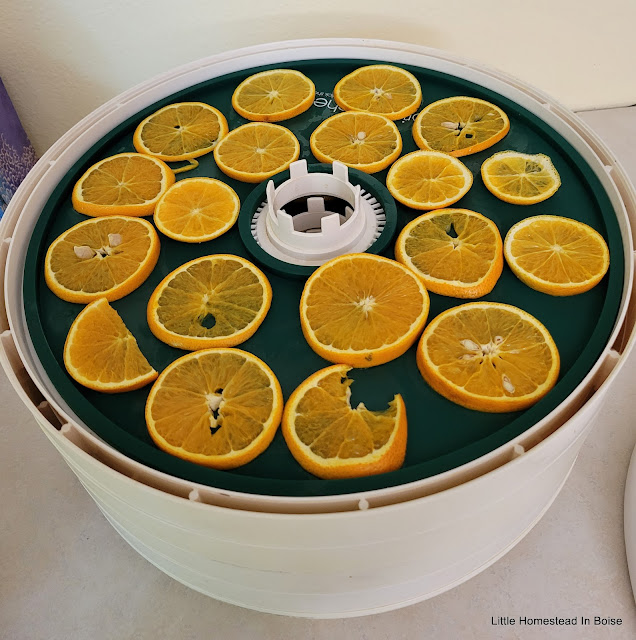 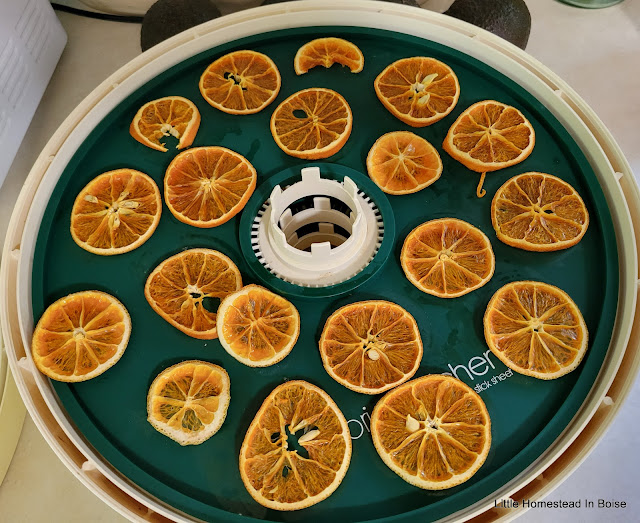 It will be really handy to have that area for cooling home-canned bloing jars instead of the top of my dining table. When we have lots of company over in the winter for the holidays I can use it as a serving area. So far so good! I'm leaving the dehydrator there for now so I can run various batches including eggs. More on that below... 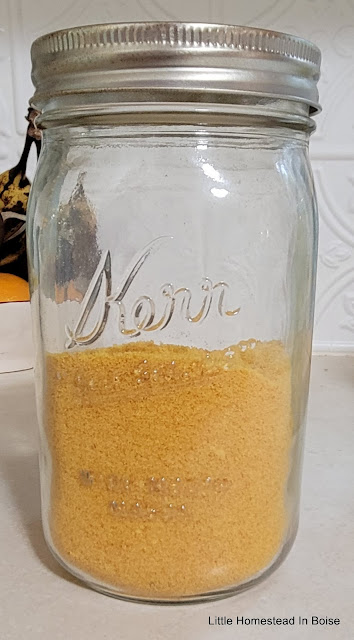 18 eggs in there!
Dehydrating Eggs!
I've seen a few different blogs and YouTube videos that had information on how to dehydrate fresh eggs. I decided to try that! Since we have a bumper crop of our own organic eggs it's a good shelf stable way  to preserve them! Basically I ran about 9 of our eggs at a time through our Magic Bullet until blended, 18 totla in the 1st batch. I had previously bought some silicone trays for inside my food dehydrator, link here Dehydrator Trays I had the trays stacked and simply carefully poured the eggs in. The temperature I read everywhere was to do about 140° for about 18 hours or so. Probably depends on the humidity where you live. Here's the photos of the process- 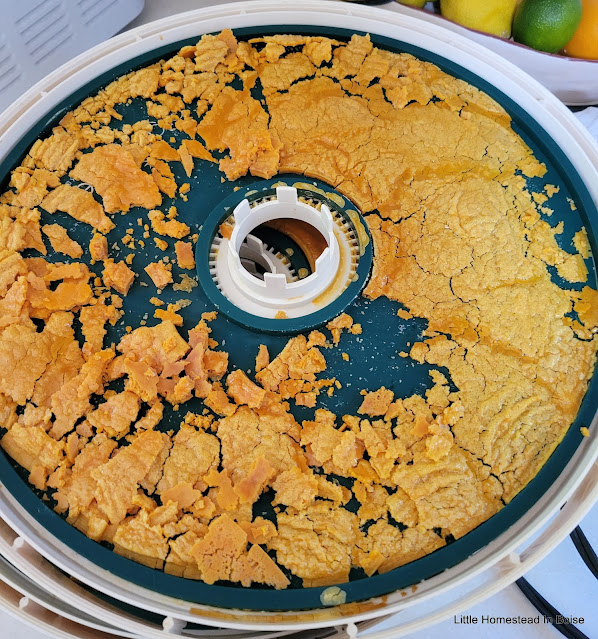 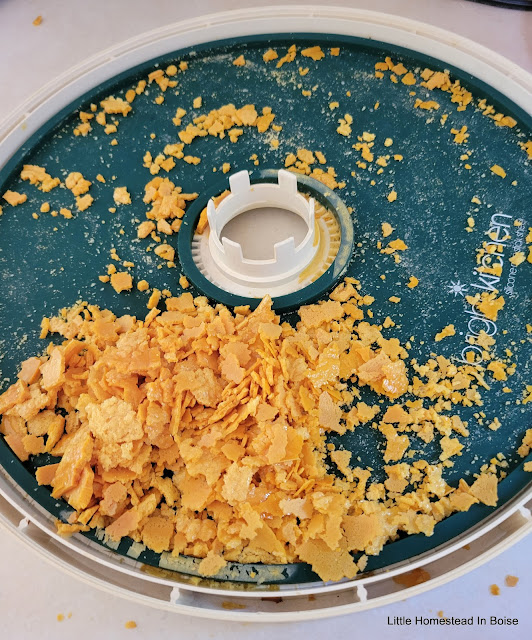 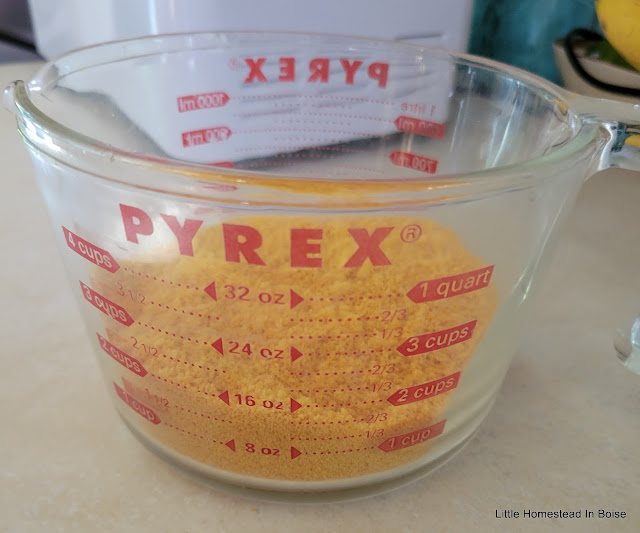 I ran the chunks thru the Magic Bullet again (clean and dry), came out perfect. I added to O2 absorbers in the glass jars. Just treat like raw eggs and cook. You can use in baked goods, for scrambled, eggs etc.
Great video here from one of my fave Youtubers with lots of info!  From RoseRed Homestead- 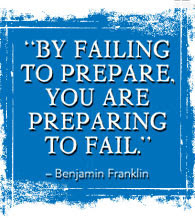 Posted by Nancy @ Little Homestead In Boise at 9:12 PM

Great suggestions. There is no better time to prepare ourselves than RIGHT NOW. I love that you provide a few different ideas so someone can get started no matter where they are.

Thanks Sonia! I try to diversify, so to speak, on my blog posts since so many people keep doing the same thing over and over. For instance I'm pretty well burn out on craft ideas. I'd rather spend my time and energy preparing for the rocky times we were in. Thanks for stopping by! 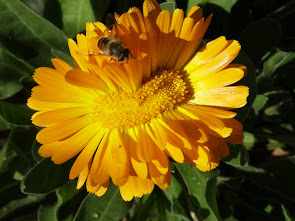 As an Amazon Associate I earn small fees from qualifying purchases by your linking to Amazon.com products listed below. They may be books, tools, DYI items or other things. This helps support this blog and adds no additional fees for you! Thanks for supporting this blog!
RECOMMENDED READS WITH LINKS