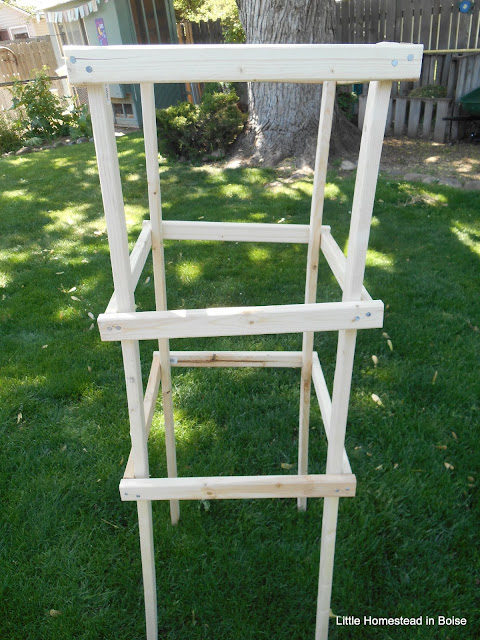 Building New Tomato Cages-
We have tried so many different tomato cages over the years that it's not even funny. We tried the old-fashioned wire ones that you can buy that are cone-shaped, when the tomatoes got too big it would all fall over. Then we bought some metal wire ones that were hinged and great to store, but were too lightweight and would also fall over. We tried bamboo, it would crack and fall apart. Then we finally started using scrap conduit from work from Dave, and it was tough and rugged. The problem was you couldn't really tie the tomatoes up to it or it would all slide down. Dave had the idea to just build some new wooden tomato cages. He looked around and we talked about sizes and then this weekend  he bought some nice culled wood. Culled wood is wood that is warped/twisted/bent and is not sold at the normal retail price. Most places that sell it, like the big box stores, sell it 50% to 70% off! That's a huge savings. So Dave shopped around at both of the big box stores in our area and bought some pine furring strips. He used 1" x 2"s, and 1" x 4"s cut down to 1" x 2"s- 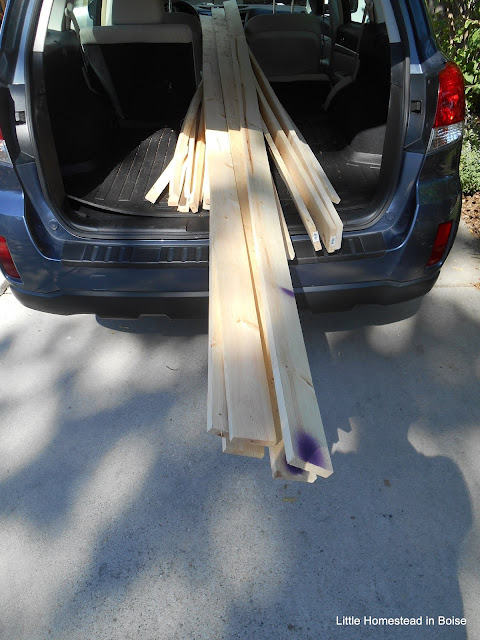 wood ready to be unloaded

They're nice and sturdy and should last quite a few years! He made about four foot high, 16" square, with galvanized nails.  Here's the tomato area, he created a new "chicken" fence, much nicer than what was there before. 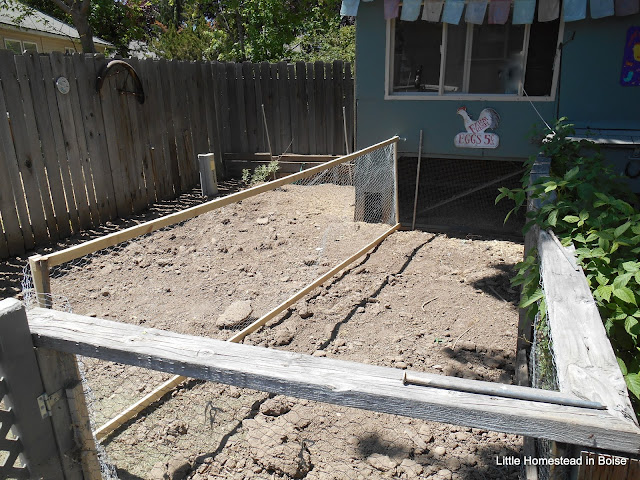 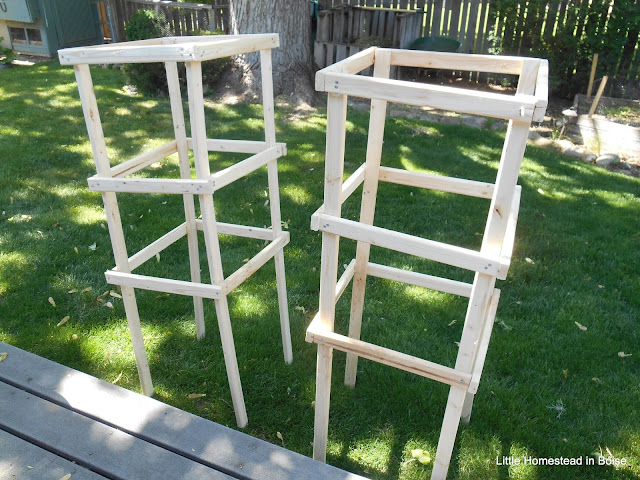 Planted and sunk down in the ground about one foot, dug small hole and back filled- 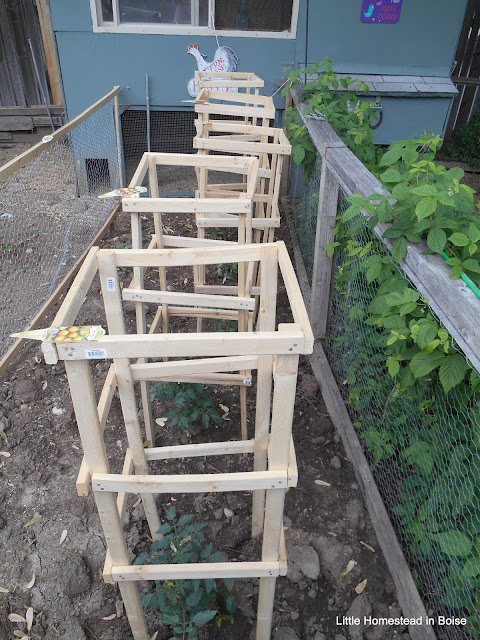 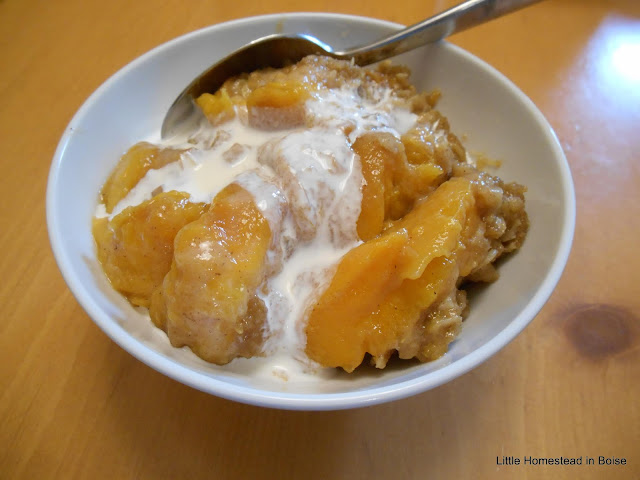 Peach Crisp-
I'm working on emptying out some of the things in our freezer since we have three fruit trees that are pretty full and summer veggies will be ready in a few months. I had some amazing peaches frozen from one of Dave's co-workers and so decided to make this Peach Crisp  It came out really super luscious! I used WW pastry flour and cut down the sugar since the peaches were dead ripe. 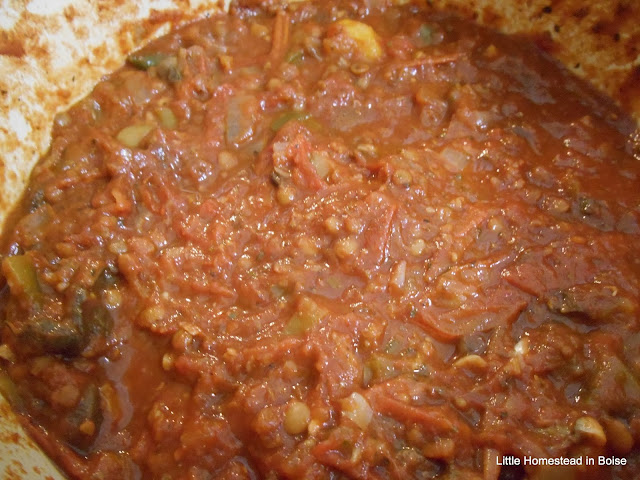 Vegan Spaghetti Sauce With Lentils-
Since we're working on more of a plant-based diet I decided to add some canned brown lentils to a big pot of homemade spaghetti sauce. I used some of our organic homegrown frozen tomatoes and Italian peppers from last summer. To that I added one chopped onion, 3 cups sliced mushrooms, all the normal spices like fresh garlic, oregano, basil, thyme, etc. I added the lentils last and then cooked down the sauce for about 2 or 3 hours. Came out nice and hardy and no lentil flavor at all! All in all it's a keeper. More protein, tons of fiber, and literally no fat, except about 1 TBL to saute the garlic and onions!
Posted by Nancy @ Little Homestead In Boise at 7:48 PM

Your peach crisp and spaghetti recipes look delicious! And those tomato cages are much sturdier than mine. Saw your post on The Homestead Hop!

Adding lentils as a protein replacement is a brilliant idea - especially in a dish where they can add without taking over the taste! Great idea, too, on the tomato cages. I am still using the wire ones and they are a pain! I manage to keep them upright - barely - with the use of well-placed rebars.

Yes the lentils are from a class I'm taking. We hated the wire cages! Frustrated to no end

Hi Nancy,
I heard that you had trouble linking up to the Farm Fresh Tuesdays Hop the other day. I'm so sorry for the inconvenience. Please let me know if it happens again. Hoping it was just a glitch.

Excellent tomato cages. The ones they sell in the stores are so dumb. Not to mention too short! Dave's look much better suited for real support for tomatoes.

A Green and Rosie Life said...

Good luck with your tomatoes this year! I'm another one who loves lentils and add them to so many recipes now to reduce our meat intake. #FarmfreshTuesdays

Thanks, more veggies to plant but too much rain 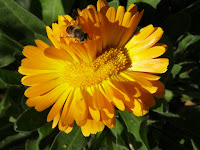 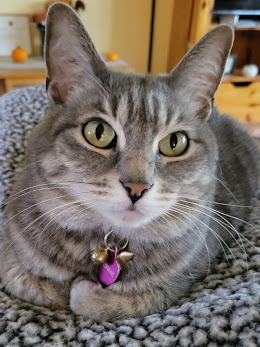 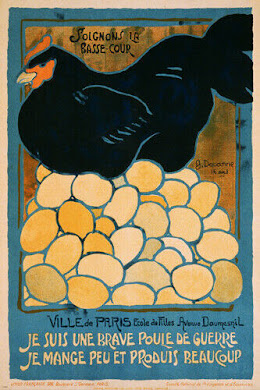