Wow, 42 last week!
Fermented Pickles/ Preserved Peaches In Honey/ Preparedness 5.0-
Autumn is in the air! It is finally cooling down what a nice trend! Tomatoes are just turning pink finally!!! What a late start/severe hot weather we've had. It's been interesting seeing what's going on in some of the local grocery stores. We tried to buy some distilled water this weekend and couldn't find any in a very large store. We were told by one of the cashiers that the plastic bottles that the water goes in is made in China and so there's a shortage of them. We went to a Walgreen's pharmacy and found some there, but they were almost out. We were told there that there was a shortage due to labor issues in California with workers. Not enough people in the factories to fill the water bottles. Beef prices have really skyrocketed! Glad that's not something we eat a lot of anyway. I do have three roasts I bought months ago in the freezer.
I decided to start making some homemade bread soon and will probably stop buying sandwich bread completely. We eat one loaf a week, maybe. Luckily I have a recipe from several years ago that I had made successfully. I did buy some King Arthur flour whole grain dough enhancer. Basically makes it rise a little bit more and is not quite so dense. I'm looking forward to baking some bread and always makes the house smell so great! I saw a dough whisk and decided to buy one, comes with a curved scraper- 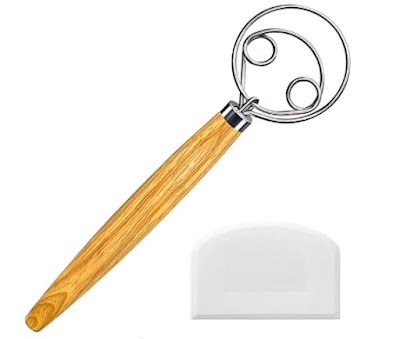 Comes with a flexible scraper- 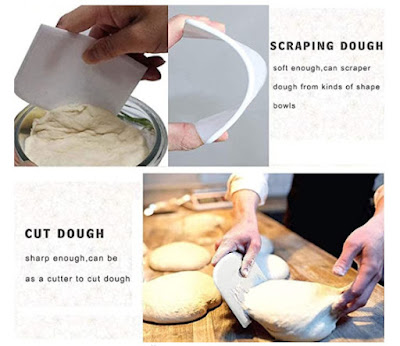 $7.00 on Amazon
I am still stocking up on a few small things here and there quite like canned veggies. I also found some nice big bags of frozen veggies at Costco. I suspect that over time there will be more shortages of fresh produce so I'm planning ahead. We made a trip Saturday to a place we've gone the last couple of years. It's a rural farmstead store. They have the best pickling cukes! I just couldn't grow enough to use. So I bought a bunch. I did three jars of one with garlic, dill, mustard seeds, black peppercorns. I did one jar with just garlic and dill. I use my fermenting jar with the water lock and three with Mason Tops- 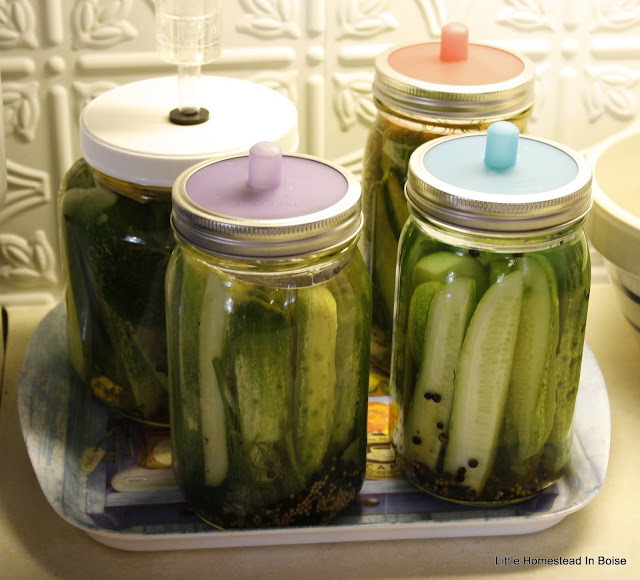 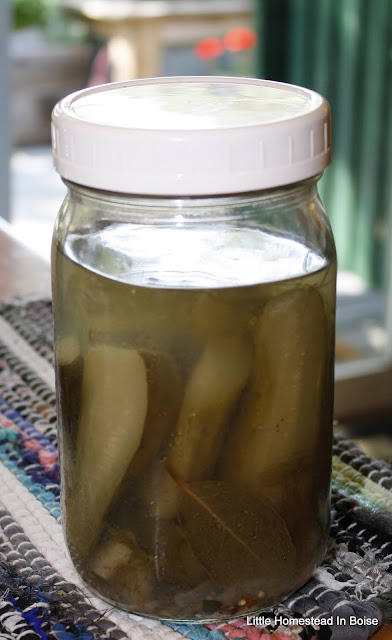 We also bought two huge frozen chickens, also local. Last year the ones I bought were almost the size of a small turkey!  Recently I scored some raw local honey in Costco. I decided to try this recipe   Peaches Preserved in Honey Lacto Fermented I may try her Blueberrie recipe next! I took some of our organic peaches out of the fridge, got a clean jar (thrifted) and the honey- 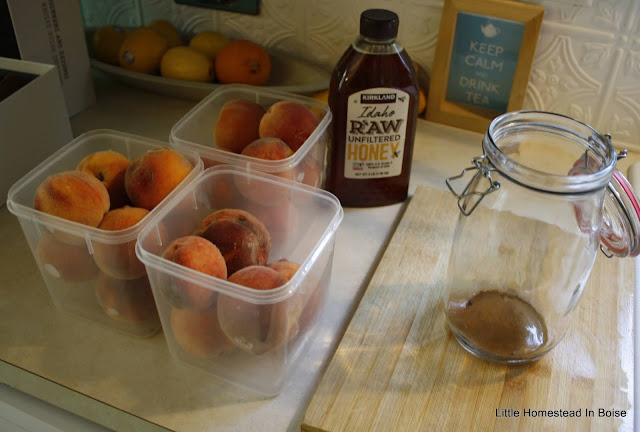 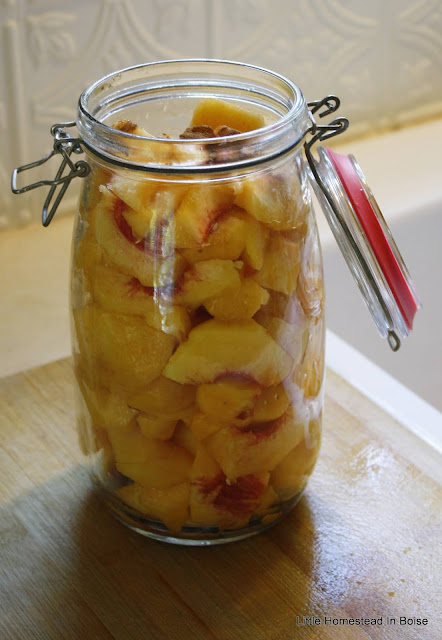 all sliced, cinnamon and peppercorns in the bottom 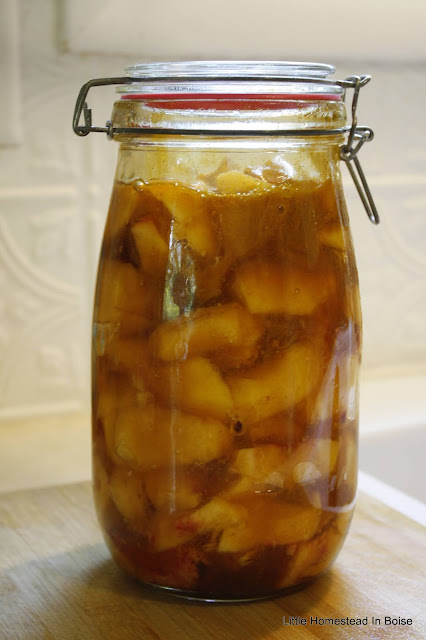 I topped off with the Turmeric and added the honey. I had to take a knife down the sides to get it flowing down. I had to add three batches, slowly, about 1 and 1/2 cups, to 1 and a 1/2 Qt jar (about). Now resting and getting bubbles today! 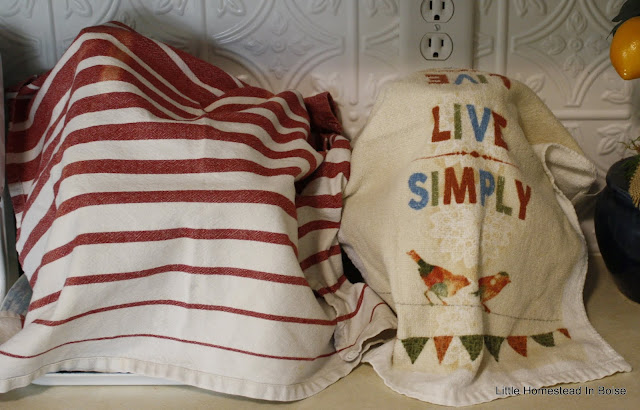 I also made some pickled red onions- 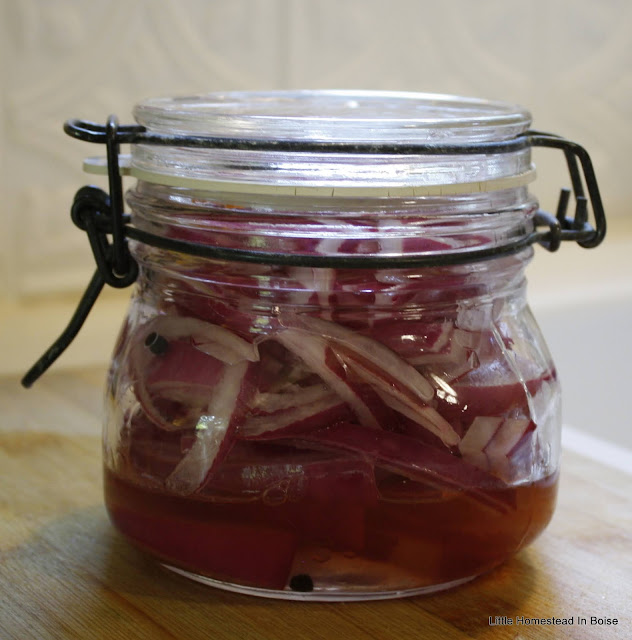 Slice the onions thins, put in a jar, add a few peppercorns (or diced jalapenos/red pepper flakes), season rice wine vinegar (or apple cider), a little salt, shake well. Great on sandwiches and salads! Let sit for a day or so and it's ready!!!
Nancy @ Little Homestead In Boise at 8:34 PM
Share